For years, industries have glanced over 3D rendering services as a whole, paying little to no mind to the potential impact of the technology.

An easy explanation for that is just how young the rendering industry is. In its earlier years, developers were insistent on building the best 3D software and concerned with only producing the best quality 3D renderings.

But with the industry still in its youth, it often leads real estate leaders wondering, why? What’s the impact? Where is the data that tells me it’s worth it?

An easy explanation for that is just how young the rendering industry is. In its earlier years, developers were insistent on building the best 3D software and concerned with only producing the best quality 3D renderings.But with the industry still in its youth, it often leads real estate leaders wondering, why? What’s the impact? Where is the data that tells me it’s worth it?

It’s no longer about whether or not a 3D rendered image looks like a real photograph. Today, it’s all about what 3D renderings can do.

| Related: The Best 3D Rendering Examples That Will Take Your Breath Away

That’s over the span of 16 years. The growth has been something else entirely in apartment construction. For example, in San Diego, multifamily accounted for 19.7% of spending on new residential construction in 2000. In 2016, it had risen to nearly 60%.

With so many new multifamily buildings and commercial spaces on the horizon, developers are turning to 3D architects to breathe life into their projects to better market their new concepts.

I think far too often we miss out on the true meaning of 3D renderings. Creating a high-quality photo-realistic rendering is extremely important, and one of the many end goals in producing 3D content. But we need to dig a little deeper than that. We need to think of it with a storytelling perspective.

Especially in the case of new developments, 3D renderings introduce the brand and give the building a unique identity within the market.

Is it a luxury, modern high-rise? Or a hip, colorful apartment with a unique clubhouse? Does the community have a coffee station? Or perhaps the fitness center overlooks the city outside.

How do you show this to future renters before the building opens its doors? How do you help residents see themselves living in a space that doesn't exist yet? That’s where 3D renderings lend a hand in helping property owners express the value and personality of their space during its development stages.

The Importance of “Show, Don’t Tell”

The first impression of your new property is the most valuable. It’s the difference between having a flock of sight-unseen leases come in or empty units when you open your doors.

A new multifamily development without a 3D virtual tour leaves everything to the imagination. Sure, you can list off all your amenities or unit features, but as a renter, I don’t get a sense of the building’s personality or flow without a visual. Marble countertops say something different than quartz. Shiplap walls in your clubhouse tell me something else entirely than vertical striped wallpaper.

Often times, their clients struggle to visualize a fixer-upper as their new home. When the brothers attempt to sell their clients on a fixer-upper, they show them what the space could look like using quick 3D visuals of the remodeled space.

Sometimes, residents don't know they want to "see" a space until it's too late. Maybe they move in and they didn't realize the hardwood floors would be grey or that the kitchen cabinets would be black walnut and not black cherry.

Residents want to see a space before they sign on the dotted line (even if they don't think they do).

3D virtual tours alone offer a totally different experience than a standard 3D image. Residents can actually tour a development before even breaking ground, get a feel for the space, and confidently sign a lease and move in to their unit when the building is ready.

Property managers have the choice of choosing between 2D or 3D rendered floor plans. They each have their perks, but one naturally stands out as a top choice for most. 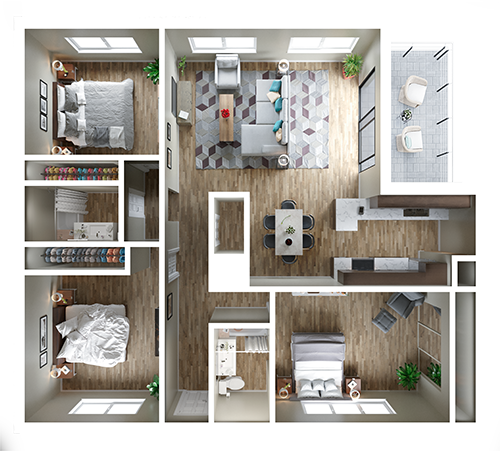 2D floor plans are a top flat view of a unit, but offer no perspective, typically no furniture or materials, no shadows or depth, and very little detail. 3D floor plans, however, represent a more accurate depiction of a unit, with angles, shadows, furniture, and realistic textures.

Realistic renderings feel tangible and manifest better in the mind than a top view 2D floor plan. That’s why more properties opt for 3D over standard 2D floor plans to offer a better sense of transparency when marketing a unit.

Looking Ahead at the Future of 3D

The global visualization and 3D rendering market is set to reach $5.63 billion by 2025. As more and more commercial real estate developers turn their attention to 3D rendering services, I suspect that number could grow even more.

3D renderings, if leveraged right, act as the modern sales tool for properties in development. Whether a rendered image, floor plan or 3D virtual tour, renderings offer a truly unique and memorable experience that can’t be matched by other visual marketing methods.

If you're looking for a 3D rendering company to bring your next project to life, let us know!